Reset your defeatest attitude in minutes.

Is your defeatist attitude keeping you down? Here's how to stop self defeating thoughts 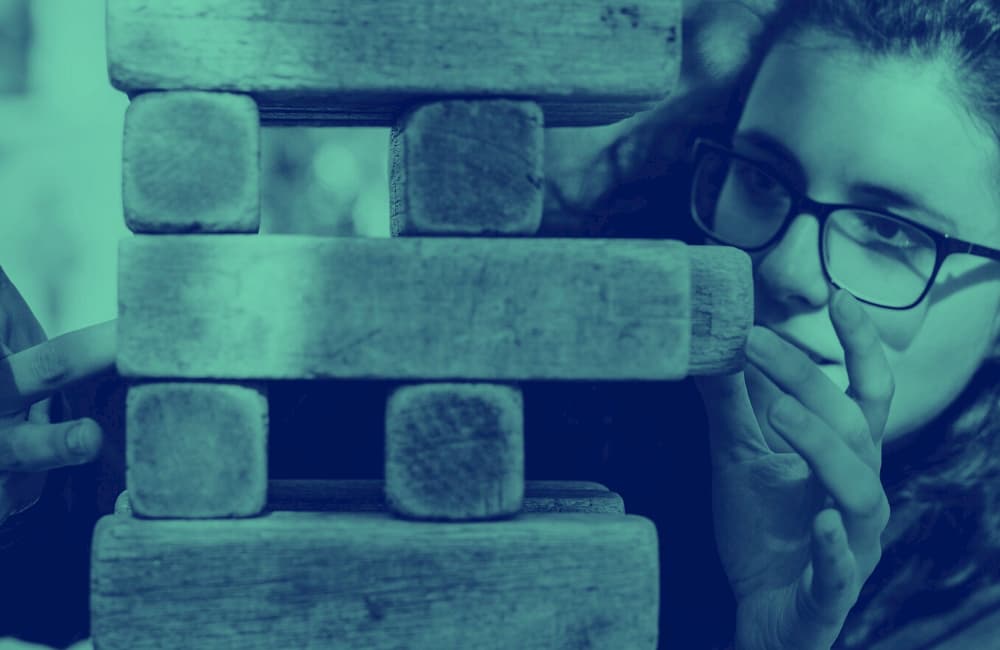 What is a defeatist attitude?

A defeatist attitude is a negative mindset in which you believe you’re going to fail before you even start. You talk yourself out of achieving things by telling yourself you’re incapable of success, even if you don’t have any evidence to support that.

A defeatist attitude can be crippling, and if left unchecked, can block you from achieving your most important goals.

A defeatist attitude will help you fail, before you even start.

Try to remember the last risk you almost took—that could be launching a startup, learning a new skill, or conquering a challenging project.

Now, why didn’t you end up taking that risk? Was it because you were so convinced you’d fail that you never even began? Or did you hit the first bump in the road and become so discouraged that you gave up before you got too invested?

Here at Fingerprint for Success (F4S), we’ve spent twenty years studying how attitude is the cornerstone of your success. Recognizing and adjusting your attitudes about failure presents a huge opportunity for individuals to achieve success, whether they’re founding a startup,  joining an organization or starting a lifestyle business.

Attitudes towards failure may have far-reaching ramifications for overall success, so if you find yourself getting easily discouraged after setbacks, below, we’re going to help you identify a defeatist attitude—and most importantly, show you how to overcome it.

Where does a defeatist attitude come from?

You weren’t born with a defeatist attitude, nor are you destined to be stuck with one for the rest of your life. Let’s examine some common root causes of this mentality so we can better understand how to overcome it.

The Merriam-Webster definition of self-esteem is “a confidence and satisfaction in oneself.” So if you’ve got low self-esteem, you’re not very confident in or satisfied with yourself. And that can affect the way you view setbacks.

After experiencing failure, participants with high self-esteem focused on their strengths and suppressed their weaknesses, apparently as a way to maintain their positive self-view by staving off threats to it. But for those with low self-esteem, their weaknesses became more accessible to them after failure.

Given how adversely affected they are by setbacks, it’s easy to see why people with low self-esteem might develop a defeatist attitude.

Painful events, such as failing to secure funding for your new startup, can make you avoid future situations where you might fail again. Negative past experiences coupled with low self-esteem can breed a paralyzing fear of failure that stops you from achieving your goals.

Core beliefs are what we believe about ourselves, others, and the world around us, such as “people are generally kind” or “I’m not good enough.” Whether we’re conscious of them or not, core beliefs affect our behavior and explain why we do what we do.

So, for example, if one of your core beliefs is “I ruin everything,” you’ll fall prey to what psychologists call “confirmation bias” — you’ll start looking for evidence that supports your negative core belief. This can perpetuate a defeatist attitude.

How your defeatist attitude is holding you back

It makes you more likely to fail.

In an ironic twist, a defeatist attitude—so often used as a shield against failure—can actually make you more prone to failure. When your self-talk consists of statements like, “I can’t do this” or “I’m going to fail,” you can become a self-fulfilling prophecy. In one study of tennis players, Springfield College researchers found that negative self-talk was associated with losing.

It prevents you from trying new things.

It can make others view you negatively, too.

A 2007 study published in the Journal of Consumer Research found that negative external opinions have more influence than positive ones—and not only do they shift opinions from good to bad, they make bad ones even worse.

Participants were given a product and were allowed to form their own opinions of it. But when they were later told what their peers thought of the same product, negative external opinions exerted a much stronger influence over their attitudes than positive ones.

While you’re certainly not a consumer product, other people’s opinions of you can be a product of your negative self-view.

5 tips to overcome your defeatist attitude

1. Remember that you’re doing something hard

Entrepreneurs are the people who are creating new things, taking risks, imagining new worlds – that’s hard, and mistakes and stumbling blocks will happen. If it weren’t hard, everyone would be an entrepreneur. The key is to stop beating yourself up about it when a failure occurs.

“Instead of mercilessly judging and criticizing yourself for various inadequacies or shortcomings, self-compassion means you are kind and understanding when confronted with personal failings.”

Learning self-compassion is the first step to helping you move on from failure effectively.

Negative self-talk as a response to failure can be a major roadblock in overcoming setbacks – things like:

Dr. Jennice Vilhauer, Directory of the Outpatient Psychotherapy Treatment Program at Emory Healthcare, explains why this kind of talk spells bad news for people trying to achieve their goals:

“Because of the way our brain works, we all have an automatic selective filtering system that will look for evidence in our environment that matches up with whatever we believe to be true about ourselves. We will then disregard other evidence to the contrary.”

(For more on this, Dr. Vilhauer’s TEDx talk goes into detail about how your expectations create your circumstances.)

This means we have a tendency to zero in on small mistakes and errors as proof that we’re stupid or that our dreams will never become reality. So how can we challenge negative self-talk? Ben Martin, Psy.D. shares four steps:

Getting out of a rut after experiencing a failure can be a challenge, but focusing on goals and motivations can help you get back on track and fuel a more productive, confident mindset.

Tricks to modify negative self-talk include avoiding all or nothing talk like “always” or “never.” Rather than “I can’t,” try “I haven’t yet.” Instead of “I failed,” try “this approach didn’t work, I’ll try another.”

Oh, and by the way: repeating positive affirmations has been found recently to do more harm than good: if you already have a tendency towards low self-esteem, it only encourages negative self-talk rather than rewriting the script (more on how it happens here).

3. Embrace failure by identifying which emotions are holding you back

It’s a cliché, but it’s a cliché for a reason: learning to embrace failure, and taking an analytical rather than an emotional approach is a huge step in overcoming a defeatist mindset.

“The emotions that arise during a failure and can hold you captive to defeat: embarrassment, frustration, anger, regret, nausea, fear of failure and judgment or feeling like you are inadequate.”

Fouts notes that the negative emotions that come from a feeling of failure or defeat can magnify or create other problems, making it difficult not to take failure personally. Her tips:

So, to overcome a defeatist mindset, take a magnifying glass to what’s holding you back as well as what motivates you. Work on your grit and tenacity (it can be learned!) to focus on your long-term goals, and remember that entrepreneurs survive and thrive by being self-aware about what motivates them, and by cultivating an agile mindset.

4. Consider the consequences of worst-case scenarios

People with a defeatist attitude tend to catastrophize, meaning they imagine the worst possible outcome. If that’s you, flip this bad habit on its head and use it to your advantage.

To begin, ask yourself, “What’s the worst that could happen?” and allow yourself to run through worst-case scenarios. So, for example, let’s say you’re catastrophizing about giving a presentation at an important work conference. You might think:

But don’t stop there! Now that you’ve got your list of worst-case scenarios. Ask yourself another question, “What’s most likely to happen, though?” This will help balance your negative thinking with some more realistic thoughts. So you might counter your previous “what if” statements with:

And if your worst-case scenario comes true—take heart. Research shows we tend to overestimate the effect even the most significant events have on our long-term happiness.

Psychologists Elizabeth Dunn, Daniel Gilbert, and Timothy Wilson did a study on college students who were in a housing lottery for dorm rooms.

The lesson here? As devastating as a failure may seem in the moment, it probably won’t affect your long-term happiness.

Expecting outstanding results the first time you attempt something new is unrealistic and sets yourself up for failure. To overcome your defeatist attitude, you want to gather more evidence that you can succeed. To do that, start with small, manageable goals.

For example, maybe you want to launch a six-figure consulting business. If you expect you’re going to be on track for your revenue goal within a month of getting started, you’re bound to be disappointed. Instead, break that goal up into smaller milestones. Focus first on winning your first client. And when that happens, treat yourself!

Little by little, as you accumulate more small successes, your self-confidence should grow, and your defeatist attitude should diminish.

In fact, researchers Teresa Amabile and Steven Kramer coined the term “progress principle” to describe the fact that making progress tends to boost emotions and motivation.

Ready to defeat your defeatist attitude?

Hopefully, by now you realize that you are not doomed to a life of defeatism—your attitude is changeable! Like most things worthwhile, though, it’ll take some work.

The first step is to become more self-aware, which, congrats, you’re already doing!

Reset your defeatest attitude in minutes.